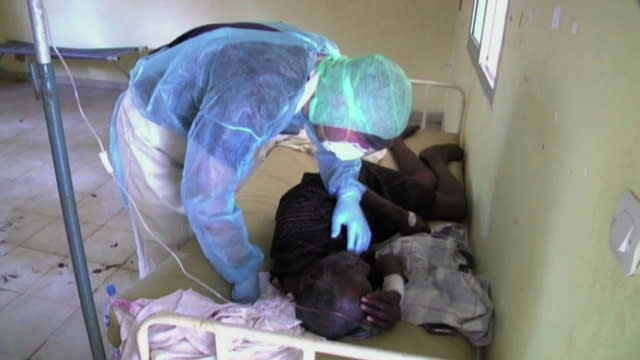 LONDON (Reuters) – The death rate so far in the world’s worst outbreak of Ebola is not as extreme as recorded in the past, but experts expect it to prove no less virulent in the end, once more victims succumb and the grim data is tallied up.

Latest figures from the World Health Organization (WHO) record 1,603 cases of Ebola in the West African outbreak and 887 deaths – giving a death rate of just over 55 percent.

That is well below the 78.5 percent average death rate over 14 past outbreaks of the same virus – called the “Zaire strain” after the former name of the Democratic Republic of Congo where it was first detected in 1976. In some outbreaks the rate was up to 90 percent, according to WHO data.

Experts say death rates for Ebola outbreaks can rise as the disease runs its course, which is what they now expect.

“This is partly a statistical thing about collecting death events, and also partly about the maturity of the outbreak,” said Derek Gatherer, a virologist at Britain’s University of Lancaster who has been following the outbreak since it started in February.

“The nearer we get to the end of the epidemic, the closer we would expect the fatality rate to correspond to the Zaire Ebola average of 80 percent,” he told Reuters.

Ebola can take up to a month to kill its victims, said Ben Neuman, an expert in viruses at Britain’s Reading University.

Already, the death rate in Guinea, where the infection was first detected, has reached 74 percent. The overall regional outbreak mortality figure is brought down by lower death rates in countries that were more recently hit: 54 percent in Liberia and around 42 percent in Sierra Leone.

“It will take a few weeks until we see the outcome of a wave of new cases like this one,” Neuman said. “(The) Ebola fatality rates look particularly low in Sierra Leone at the moment compared to Guinea, because the virus only recently arrived.”

There is still some hope that the rise in death rates can be slowed through medical care. Neuman noted that when doctors are able to begin treatment soon after infection, the survival rates from Ebola can increase significantly.

But even at 50 to 60 percent mortality, no other human disease comes close to Ebola’s ability to kill those it infects, specialists say.

The corner of West Africa stricken by Ebola is among the poorest areas in the world and government hospitals in the region often lack even basic equipment, with dirty and overcrowded rooms.

Fear of being left to die in isolation and suspicion of doctors in masks and full body protective suits is driving some patients to evade treatment altogether, meaning they can go uncounted in the data whether they live or die.

Ebola has no proven cures and there is no vaccine to prevent infection, so the best treatment is focused on alleviating symptoms such as fever, vomiting and diarrhea – all of which can contribute to severe dehydration.

But languishing in the bottom part of the U.N. Human Development Index, Guinea, Sierra Leone and Liberia have some of the weakest health systems in the world. This, combined with porous borders, poor sanitation and local ignorance of the disease have helped its spread.

Nigeria said on Tuesday it had eight suspected cases linked to a confirmed fatal case in a man who traveled to Lagos from Liberia last week. Saudi Arabia’s health ministry said it was also testing a suspected case in a man returning from Sierra Leone.

Two American aid workers who contracted Ebola while working in West Africa have been flown home for treatment are likely to have a better than average chance of survival due to higher standards of healthcare.

Guinea, where the outbreak started in rural forest areas in the east, had the lowest ratio of hospital beds per capita in a World Bank survey of 68 nations in 2011, with just three beds per 10,000 people.

Outside the main cities, rural healthcare clinics are rudimentary with healthcare experts saying even basic equipment like plastic gloves is unavailable.

Although malaria and other fevers are regularly treated at hospitals and clinics in the three countries, their facilities were not prepared for a disease as deadly as Ebola. Health authorities and medical NGOs had to scramble to set up makeshift isolation units – often a collection of tents – in rural areas.

Neuman said there was some hope that public relations efforts to get more people to seek treatment for Ebola would pay dividends in lower death rates.

“While improvements in care will undoubtedly continue to increase the Ebola survival rate, there will unfortunately be more casualties from among those who have already caught the virus,” he said.

As of August 1, 2014, the cumulative number of cases attributed to EVD in the four countries stands at 1,603